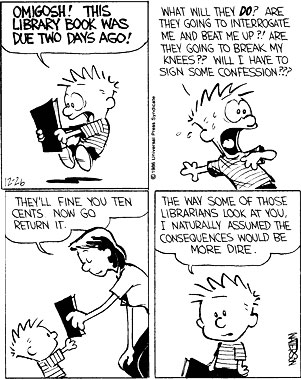 The cartoon to the left was created by Bill Watterson, artist of the long running Calvin and Hobbes cartoon. I found it via Pinterest which led to to a fun new-to-me blog: Small Review. The blog author, an American woman working in a public library, used this image to illustrate her point about the misconceptions and stereotypes of librarians.

I’ve encountered variations on this cartoon’s theme while working the service desk. Sometimes it might be a middle aged parent getting a card for their child while confessing they hadn’t been in a library since childhood because “the librarian was so mean!” Or it might be an elderly patron worried about paying off their ten cent fine because they are anxious about the status of their record and how the librarians might react to their “transgression.”. Each of these situations feature people who seem to view librarians as barriers to the use of the library instead of facilitators. What doesn’t seem to be communicated to people in popular media is how eager librarians are to have them use public libraries and fully engage with librarians. I believe I’m doing my part every day to counter this misperception by smiling, actively listening, and connecting people to what they want. How about you? How do you think of librarians/libraries? If you’re a librarian, do you embody the stereotype or destroy it?

I think this cartoon is funny. It addresses the misconception about librarians as fine bounty hunters and the mother’s common sense advice mirrors what a librarian might say. “Come on in. We want you here. Don’t let your fears and fines keep you from using our services.”

I am a woman working in the Twin Cities as a programming Librarian.
View all posts by shortlibrarian →
This entry was posted in Images and tagged appearances, Calvin, cartoon, consequences, fear, fines, humor, Librarian. Bookmark the permalink.